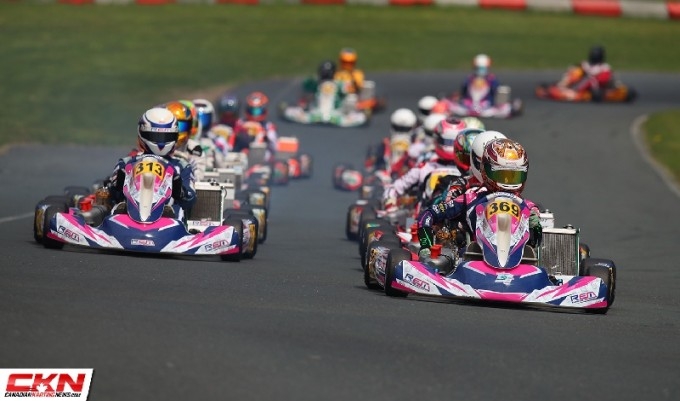 The first round is in the books for the MotoMaster Ron Fellows Karting Championship. Goodwood Kartways was a very busy circuit throughout the holiday weekend with two intense race days of competition for just over 170 racers from across the Ontario region all seeking to put their helmet on the top step of the podium.

Of the ten categories taking to the track in the MRFKC, five of them were part of the Rok Cup Canada pursuit to Italy. The class champions will earn their way into the Rok Cup SuperFinal in Lonato, Italy to take on the best Rokkers from around the globe.

With plenty on the line, the action was intense every time a Vortex Rok engine fired up and come Sunday afternoon, some drivers had set themselves apart, while some categories proved their tickets will come down to the final laps in September.

Defending class champion Dale Curran (REM/Kosmic Kart) proved he’s only gotten better since last season and he’s hungry to get back to Italy. The young man was unstoppable all weekend long, sweeping every competitive session and blasting lap times that would have been quite competitive in the Senior division.

Saturday was impressive, winning the feature by eleven seconds, but on Sunday he upped it to thirteen seconds and did it while using the same set of tires from Saturday while many of his competitors opted for new skins on the second day. Even his best lap times were more than a half-second quicker than his closest rivals, who were left battling it out for the second and third steps on the podium.

The racing for second was where all the action could be found and these Juniors put on a show. Saturday saw Andrew Maciel (VSR/TonyKart) hold off a hard-charging Marcello Paniccia (REM/Kosmic Kart) to the line. Unfortunately for Paniccia, he was excluded in post-tech, moving Gianluca Savaglio (360 Motorsport/Exprit) onto the podium.

Maciel was unable to start the Final on Sunday when he pulled off on the pace lap with a mechanical failure. Paniccia proved he wasn’t going to lose the podium on this day and took charge, getting up to second while Austin Boyle also battled through and took third.

For his efforts, Curran was named the Pfaff Motorsports Junior High Performer for the weekend, earning a nice little bonus from the series supporter.

21 drivers on the grid in Rok Senior was awesome to see and the racing was just as impressive. Hard fought battles throughout the running order provided some of the best racing all weekend with two drivers stepping up and setting themselves apart from the pack.

REM teammates Nicholas Hornbostel and Ryan MacDermid went toe-to-toe all weekend and both came up victorious. Saturday Qualifying was separated by a mere 0.01 seconds with MacDermid getting the edge. Bumper to bumper in the Final, MacDermid took advantage of a lap traffic situation that allowed him to overtake Hornbostel and even pull a small gap, but on the final lap the two once again came across lap traffic and it brought them back together, giving Hornbostel a chance. Taking it in turn nine, he was able to slide underneath MacDermid and grab the position before the run up the hill and to the finish line. Emma Delattre (REM/Kosmic Kart) had a great run to take third, but unfortunately, she was bounced in tech, moving Cole Hooton (Prime/BirelART) onto the podium.

It was much of the same on Sunday with MacDermid and Hornbostel at the front but this time, once MacDermid got out front, he was able to check himself out and pull out to a gap of more than a second and never looked back en route to the victory. Hooton stood on the podium for the second straight day in third while Delattre took fourth in a great recovery drive.

The Rok Masters also took the track with the Seniors, with Adrian Donkers (VSR/TonyKart) scoring the win on Saturday and Alexandre Mankovski topping the podium on Sunday.

There weren’t too many shifters at Goodwood but that didn’t stop them from attracting fans to the fence for their standing starts as they put on a show.

Saturday was a lights out drive by Joshua Conquer (VSR/TonyKart) who escaped the action and pulled out to a victory by thirteen seconds. The race for second was as unpredictable as possible. Frank Launi (Innisfil/GP Kart) held the spot early. Contact in turn six saw Zachary Shearer (Prime/BirelART) climb up into the air, ending his race. Three laps in, Launi’s exhaust silencer came detached, screaming his Rok Shifter engine until he pulled off. This moved Max Preston (Goodwood/Intrepid) into the spot with Dante Lerra (Goodwood/Intrepid) hounding him for second. Making a bold lunge in corner five did not pay off as Lerra bent up the steering of his Intrepid Kart before driving off into the grass after the contact. Preston was able to resume and cruised to a second place finish while Lerra retired. This left Taegen Poles (Energy Corse/Energy Kart) and Dean Cotton (VSR/BirelART) to duke it out for the final step. Cotton got ahead just past halfway and kept Poles behind all the way to the finish line.

The race for victory was much closer on Sunday with Justin Luik (Prime/BirelART) and Conquer going toe-to-toe after the Saturday winner was able to get by Preston and Shearer and track down the leader. However, once he got to the bumper of Luik, Conquer looked left, right for more than ten laps but couldn’t pull off a pass. The final lap, Luik drove a near perfect defensive lap to maintain his lead and threw his arms in the air when he crossed the finish line as the victor. Shearer took third at the line but was promoted to second place when Conquer was assessed a penalty for jumping the start. Tyler McCullough jumped into the kart of an injured Frank Launi on Sunday and finished fourth.

Rok Mini – It all comes down to the final lap

The Rok Mini class has grown in 2019 with nine karts taking to the track and more potentially joining the series as the season progresses. At Goodwood, it all came down to the final lap of both Finals.

On Saturday, defending class champion Frankie Esposito (Prime/BirelART) led every lap but his gap shrunk in the closing laps as Ayden Ingratta (AI/TonyKart) was charging hard. It didn’t help that Esposito could feel the pressure looming, looking back often instead of focusing on his marks. With the final lap sign out, Ingratta was right on the rear bumper and he pounced at the opportunity when Esposito didn’t block hard enough, leaving the door open in turn six. Ingratta exited the corner as the leader and never looked back throughout the remainder of the lap, scoring the victory. Cole Newton (Energy Corse/Energy Kart) took third ahead of Michael Riccio (BirelART) and Joseph Launi (Innisfil/TonyKart).

A four-kart pack ran nose-to-tail throughout the Sunday Final with Ingratta leading the charge after getting by Launi in the early stages. Newton and Ashton Heckel (Prime/BirelART), who missed Saturday’s race, we’re also right with the leaders just waiting for their opportunity.

The crowd was loud for this one and every time Launi took a peek to the inside they gasped. Finally, on the final lap, Launi made his move on Ingratta and the crowd roared. The young Launi managed to hold on from there and score the race win, his first major race win, throwing his arm into the air and fist pumping at the finish line. Ingratta settled for second while Henckel snuck by Newton on the final lap to stand on the podium.

Next up for the MotoMaster Ron Fellows Karting Championship is round two at the Canadian Mini Indy in Hamilton, Ontario on June 15 and 16. After the excitement at Goodwood, we’re expecting even more fireworks when the series returns to the track that made its debut with the series a year ago. To learn more about the MRFKC, visit http:///kartsportcanada.ca.