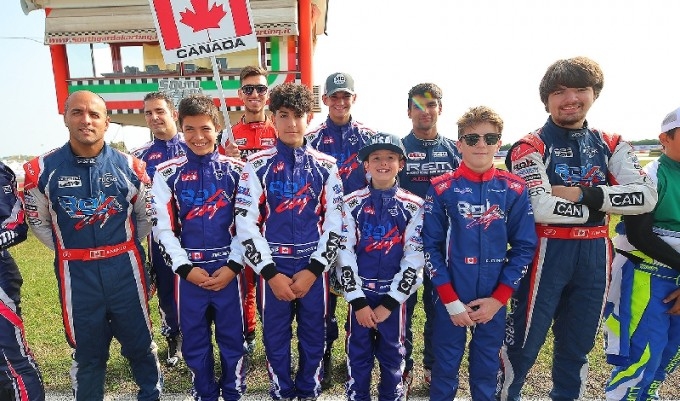 The first of our International Final races is complete as eight Canadians competed in the Rok Cup Super Final this past weekend at South Garda Karting in Lonato, Italy.

Three of our drivers were competing at South Garda for the second or third time, while the other five drivers got to experience European karting for the first time and for sure had their eyes opened to a whole new world of the sport.

With over 400 of the world’s best Rokkers in attendance, the competition level was far beyond anything our drivers get to experience in North America. Rok Junior featured 102 drivers while Senior Rok and Shifter Rok had 61 and 66 drivers apiece. Expert Rok was joined up with Expert Rok Plus to complete a field of 34 while Mini Rok set the bar with 130 young drivers and some intense racing.

The weather cooperated, although a heavy overnight rain shower on Tuesday changed the track completed before Wednesday’s important Qualifying sessions. Most drivers we spoke to said the track never returned to the condition they practiced, on Monday and Tuesday.

In the end, two of our Canadian drivers celebrated at the podium ceremony on Saturday evening, a Rok Cup party to cap off the event. Joe Crupi finished fifth in the Expert Rok Final, while Nicholas Hornbostel strategically scrapped his way to a third-place finish in the Rok Senior Trophy Final. Music, food and a fun atmosphere made the podium celebrations a little more than just drivers walking up to get their trophies. In addition to the top-5 in the A Finals and top-3 in the B Finals, the highest finishing Lady Driver was awarded, as was the driver who posted the fastest time in the A Finals.

Catching up with each of our drivers, we captured their thoughts of the event and their experience in Italy.

While Andrew was caught out in Qualifying like so many drivers, unable to post his best lap time due to traffic and positioning on track, he battled hard in the heat races and was incredible on the starts, always advancing forward. His efforts were rewarded with a gain of 18 positions and a spot on the grid for the A Final.

Unfortunately, contact on the opening lap hurt the pace of his TonyKart. He still gained a number of positions on the opening lap, but with an ill-handling kart, he faded backwards in the final and was not rewarded his true efforts.

Nonetheless, Andrew was all smiles all week long, working closely with Gianluca Savaglio and Team Canada as a whole. We know he will fight hard in 2020 to try and be back at the Rok Cup Super Final.

“The experience was amazing! I was glad to be representing Team Canada and taking part in the parade, the introduction ceremony and all the team pictures. Everything was so professional and well done and the quality of the entertainment at the party with foods and music of all cultures was amazing to have. All the awards and the competitions off track were also enjoyable to watch and take part of. Such as the best team picture and suits, the youngest driver award and the most experienced award brought some competition and fun off track. I was glad that I got to experience this event and hope that I will get to experience it again.”

“I was also glad to work together with other Canadian drivers from other teams. We really had a national team environment and we all worked together helping each other during the week. I am sure this week made me a stronger driver and I strongly believe this is an opportunity all drivers should aim for. All Canadian drivers had a very good pace and it shows how strong our racing level is in Canada.”

We had high ambitions for Dale Curran entering the Super Final following his experience last year and his pace at the Trofeo race the weekend before. However, he just never quite returned to that form. He mentioned a couple of times that he was struggling for straight-line speed, and it was obvious in a couple of races as he would have strong starts from the fourth row on the grid and then slowly fade back into the pack.

Curran was able to recover from a 31st in his first heat to score consistent top-10’s and ensure he made the A Final for the second year in a row, but unfortunately bad luck on the opening lap struck again and his race was over before it even got started with a crash in the first corner after being tapped from behind and then driven over.

Moving on from Junior, we’re sure Dale would love a chance to showcase his talents at the Super Final one more time, but as a Senior. Hopefully, he can make it happen in 2020.

“It was a great experience to race with all of the international drivers from around the world at the Rok Cup Super Final. It was also a great experience to race with the Lennox Racing Team, the factory-supported the Exprit Kart team. We had our challenges throughout the week but we competed in the A Final starting in the 27th position. Unfortunately, in corner one, we were caught up in a racing incident that ended our race. Although this was disappointing, I had a great time in Italy with my parents and met a lot of people from around the world.”

It was a hard-fought week for Joe Crupi as he made his third start at the Rok Cup Super Final. The competition in Expert and Expert Plus was elevated from a year ago and the grid reached the cap of 34 drivers over the age of 30.

Joe left a little on the table in Qualifying as he jockeyed with a number of drivers for track position, ultimately providing the tow with a few of his competitors needed to post better lap times. He played it smart in the heat races, which this year had progressive starting positions, and ensured he would start upfront for the Final. A great launch saw him jump up to third in the opening laps, but he wasn’t able to hold onto the position, surrendering to the eventual race winner.

Two years in a row, two podiums for Joe Crupi. That’s nothing to complain about.

“Rok Cup and South Garda Karting should be proud of the event they put on with the 2019 Super Final. From my experience, it is always a first-class karting event and I’m sure any karting fan would be amazed by the spectacle of it all. I’m envious of the karting culture in Italy as it is a much larger sport over there. I’m always surprised by the paddock full of big teams and year-round racing. I was also excited at the opportunity to race a much larger pool of experienced drivers in the Rok Expert class.”

“Building on last year’s progress together Brian and I quickly matched and surpassed our pace from 2018. This year my class was even larger and more competitive than last. It really forced me to give it my all. I was fortunate to have had good clean heats with little incident. Overall I’m more satisfied with the results this year over last as I had to work harder for it.”

“Winning the ticket to race in the Rok Cup Superfinal has been the highlight of my 2019 karting season. This event by default will make any driver better from how much you can learn and take away from it and I’m thankful to have had the opportunity.”

While Davide Greco is no stranger to international competition, the SuperFinal was his first venture into the Rok Cup Global platform and their highly competitive Rok Shifter program.

In some very new surroundings, he managed quite well with a new kart, a new track, a new mechanic and a new level of grip. The high-intensity Shifter racing caught him a little off guard in the first heat race, but once he settled down his pace ensured he would transfer to the A Final and he did just that.

The top half of the grid was divided up into a couple of groups based on speed and once Greco was in the mid-twenties, the pace was so similar that he wasn’t able to gain much ground in the Final, ultimately finishing a respectable twenty-fourth.

Following a week to spend with his Italian family, Greco will be back in action in Italy, competing in the Rotax Grand Finals for the third time, in Sarno.

“The Rok Cup Superfinal was nonetheless a fantastic event. After joining forces with Goodwood Kartways, it was my first race on the OTK product. I would consider this event the most challenging race I have ever endured in my career. Learning a new chassis and new track at a prestigious event like the Rok Final, where the competition is super tight, was very difficult. The racing was absolutely top level and the best racing I’ve seen in the Rok Shifter category. Not much surprised me during the course of the week other than how diverse the OTK chassis is. Lastly, a big thank you to Curtis Fox for a fantastic job all week and to team captain, Marco DiLeo.”

SHARE
News Search
Latest News
Rok Cup Canada Expands to BC!
Though there is a lot of uncertainty in the motorsport community right now, one thing that can be counted on is that when rac... [Read More...]
KartStars Canada Looks to the Past in Shaping the Future
With kart racing now well underway south of the border, KartStars Canada is excited today to announce the schedule for its up... [Read More...]
2020 ROK Cup Promotions Florida Winter Tour Dates Confirmed
With unprecedented growth in 2019 and a ROK the RIO event that is the largest ROK race ever in the United States, ROK Cup Pro... [Read More...]
WORLDWIDE NEWS
Daremo, quando la situazione lo consentirà, ulteriori dettagli.... [read all]
Daremo, quando la situazione lo consentirà, ulteriori dettagli.... [read all]
WORLDWIDE NEWS ARCHIVE
Tweet di @ROKCUPOfficial