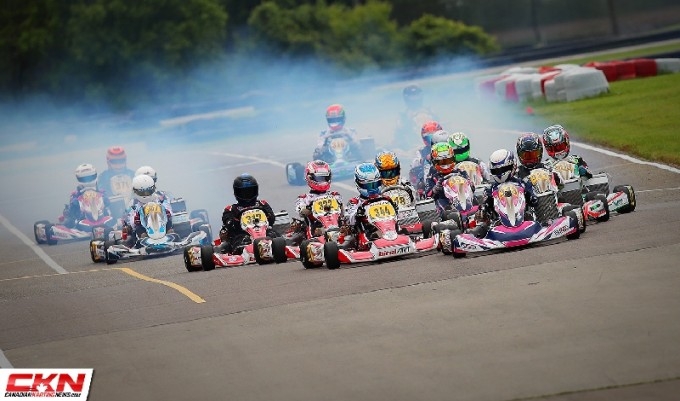 Unpredictability is a very good way to describe round two of the 2019 MotoMaster Ron Fellows Karting Championship at the Canadian Mini Indy Karting Complex in Hamilton. From minute to minute, Mother Nature couldn’t decide what the weather was going to be, changing forecasts and current conditions with the snap of her fingers from the sunrise on Saturday to the setting on Sunday. And nobody could have predicted that there would be eight different race winners in the Rok Cup classes, proving these four championships will come down to the wire.

And so with four races down and five to go, the tones have been set on what is going to be a spectacular championship race to join Rok Cup Team Canada in Italy this fall.

Here’s how it went down at Hamilton in the Rok Cup classes.

Eighteen Rok Senior drivers in the field provided a massive amount of wheel-to-wheel action at Hamilton. As expected, the Racing Edge Motorsports/Kosmic duo of Nicholas Hornbostel and Ryan MacDermid led the way when the competition kicked off, with Hornbostel posting the fastest lap in Saturday Qualifying.

After a racey PreFinal set the tone for the Final, the hounds were released for sixteen laps of battle. Patrick Woods-Toth (Prime/BirelART) quickly put himself in the battle for the lead, as did Chris Chanko (VSR/TonyKart). Digging deep, the race got really exciting on lap four when MacDermid and Woods-Toth made contact in corner five that earned the race leader a warning and backed up the leaders to form a pack of seven going for the point.

But it settled down from there as MacDermid was able to stretch out a small gap to Woods-Toth, while Hornbostel powered by Chanko to regain third. That is how they finished, with Cole Hooton (Prime/BirelART) completing the top-five.

One of the challenges that the Canadian Mini Indy is the bumps. The circuit has a few corners that really push the body of any driver to the limit. Following his race victory on Saturday, Ryan MacDermid confirmed on Sunday that he would sit out the second race day of the weekend to let his body rest before his next Formula 4 race.

Sunday’s Qualifying was extremely tight with the front-five separated by online 0.155 seconds, led by Woods-Toth and Hornbostel.

With MacDermid out, it was that duo in charge and after coming close on Saturday, Woods-Toth secured his first MRFKC win on Sunday after overtaking Hornbostel at halfway and building up his lead all the way to the finish line. Hornbostel extended his podium streak to four and will be the championship leader going into round three.

Coming home third was Hooton, who entering the weekend wasn’t even sure he was going to race, following his big crash last weekend that injured him enough to sit out all of the practice sessions leading up to this weekend. But with a little adrenaline and perseverance, Hooton found what he needed to keep himself in the championship hunt and stand on the Sunday podium. Mark Davis (Kevin Glover Racing/Exprit) and Marc-Antoine Poirer (BirelART) finished off the top-five.

It wasn’t an easy sweep this weekend for Dale Curran (REM/Kosmic) as the championship leader had Connor Pritiko to deal with at Hamilton. Curran blistered off the fastest time in Qualifying on both days, but Pritiko surprised everyone when he tracked down the race leader, passed him and pulled away in the Saturday PreFinal.

Getting to the lead early in the Final after Curran timed the start perfect to get the holeshot, Pritiko held control through lap one. Curran dove for a pass in turn four one lap, which was still under caution from an opening lap crash, meaning the new race leader was in trouble. He did acknowledge the fault and let Pritiko back by as he started lap three, only to make the same move to regain the lead, this time sending Pritiko wide and allowed both Marcello Paniccia (REM/Kosmic) and Andrew Maciel (VSR/TonyKart) to get by.

Curran stretched out a lead from there as Paniccia and Maciel made it very difficult to get by for Pritiko. The PreFinal winner did eventually get by, but Curran was fully out of sight by then. However, Curran was penalized for the pass under yellow, as well as blocking, knocking him down to third in the order and putting Pritiko on the top of the box. Maciel jumped up to second after both Paniccia and Gianluca Savaglio (Goodwood/Exprit) also received blocking penalties.

Curran cleaned up his act on Sunday and returned to his dominant form. He swept Qualifying, the PreFinal and the Final, crossing the finish line six seconds ahead of Pritiko, with Paniccia taking the final step of the podium.

There may only be ten Rok Juniors hitting the track right now, but they are putting it all on the track in these races and providing some excellent racing. Hopefully, the next two rounds at Mosport Kartways can attract a few additional entries.

There has only been ten drivers suit up this year in Rok Shifter and after four races, we’ve witnessed four different race winners. The action up front is extremely close as these shifter drivers put everything they have into not only becoming better racers but also chase the tickets to Italy and Las Vegas.

On Saturday, Zachary Shearer (Prime/BirelART) finally broke free of his luckless season to cross the finish line first and take the victory. He’s one of the most experienced Shifter racers on the grid this year but was having a hard timing getting the monkey off his back. He was solid in the Final, starting third and moving into the lead on lap three, overtaking Lucio Masini (CRG) before pulling away to a three-second victory. Masini held on to second, just beating Goodwood race winners Joshua Conquer (VSR/TonyKart) and Justin Luik (Prime/BirelART) for the second step on the podium.

There was rain in the air as the karts rolled to the grid for the Sunday Final and enough of the wet was stuff falling to make the mechanics scramble and consider the use of rain tires. However, with the clock ticking, everyone crossed their fingers and opted to stay on the slicks.

Once again, Masini was in on the battle for first, but this time it was with Stefano Lucente (Innisfil/GP Kart). The pair traded the lead in the first two laps while trying to get as much heat in their tires at the same time to tackle the slick track. As the rain stopped and the track came back to life, Lucente got quicker and quicker, pulling away from Masini to take his first victory of the season by 1.5 seconds. Conquer wound up third for the second day in a row.

Rok Mini: Esposito Gets one on Saturday; ‘Sunday Joe’ Delivers in Race 2

On Saturday, American Ashton Henckel did all he could to challenge his Prime/BirelART teammate Frankie Esposito at the front of the Mini Rok races. Taking the lead at the start only lasted a couple laps before Esposito put down his best laps, overtook Henckel, and drove off into the distance to take the race win. Cole Newton (Energy Corse/Energy Kart) closed in on Henckel in the closing laps to pressure for the second position, but he was unable to pull off a pass and settled for third.

Rain drops put fear in the mechanics on Sunday only moments before the Mini Rok drivers were set to take the track for their Final. Not enough to force rain tires, the young drivers had some of the most challenging conditions to close out their race weekend.

Newton got out to the early lead and was doing great to manage the slippery conditions. But as the leader, and the rain falling more and more each lap, he was always the first to test the limits each corner each lap, and unfortunately, turn six for the best of him on lap eight. Exiting the corner a little too hot, Newton’s kart spun and he had to watch the entire field drive by before he could resume. Esposito gained the lead from that opportunity with Joseph Launi (Innisfil/TonyKart) starting to close in on the new leader. And just like he did on Sunday in Goodwood, Launi put all the pressure on the leader in the final laps, pounced at an opportunity on the final lap to overtake the leader Esposito and score his second Sunday victory of the season.

Henckel was able to post the fastest lap in the wild race to take third, just edging out Newton at the finish as the early leader did all he could to recover.

Next up, the MotoMaster Ron Fellows Karting Championship heads to Mosport Kartways at Canadian Tire Motorsport Park for round three, featuring races five and six on July 5-7.