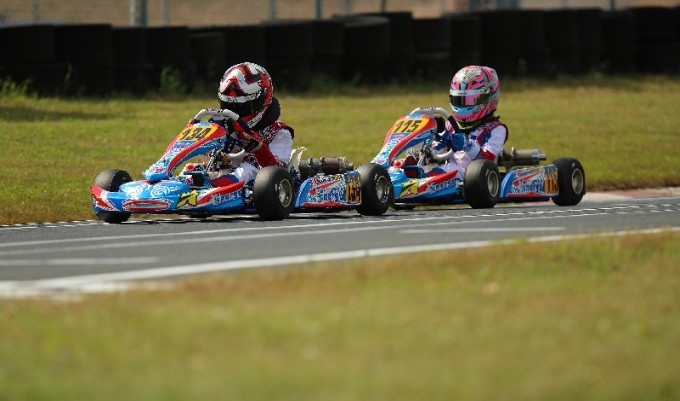 Following Saturday’s beautiful sunshine and clear conditions, Mother Nature delivered plenty of unpredictability for Sunday’s events, which featured the PreFinal and Final races for all of the Rok Cup categories at the opening round of the 2020 Kart Stars Canada Championship, held at Goodwood Kartways.

For the most part, all of the PreFinals were completed on a dry track, although a few sprinkles turned into a heavy downpour in the middle of the VLR Masters heat that gave the old guys some seriously challenging conditions on slick tires.

While the sunshine did return, the Rok Shifter, Rok Senior and Rok Junior Finals were on a wet track, while Rok Masters enjoyed mixed conditions for a second time of the day, this time with the track drying up before Mini Rok was back to their full dry setups to wrap up their event.

Driving home the victories were Austin Boyle in Junior, Nolan Bower in Senior, Frank Launi in VLR Masters, Dante Lerra in Rok Shifter and Ryan Maxwell in Mini. Sharing the day with three other Briggs and Stratton categories, it was a busy day of action at Goodwood.

First up to hit the track for their Final was Rok Shifter. Blasting off the start line on a wet track and into turn one, Davide Greco (Intrepid) continued to lead the way like he had done all weekend long, while Lucio Masini (RS Kart) was hot on his heels, followed by Dante Lerra (GP Kart).

Masini didn’t waste much time and disposed on Greco early on to take the lead and the front three stretched out from there until two laps to go. Greco, seemed to be fighting a mishandling go-kart, got a little too loose exiting the fast first corner and looped it, allowing Lerra and Antonio Ferrari (RS Kart) to get by. Quickly gathering it up, he refired his kart as Ferrari drove by and he went into pursuit with only two laps remaining. Masini cruised to the finish line with ease, followed by Lerra a few seconds later while Greco caught and passed Ferrari before the finish line.

Unfortunately for Masini, he was excluded in post-race tech for a rear width issue, moving Lerra to the top of the podium, Greco to second and Ferrari to third. Giles Gallie (GP Kart) was the highest finishing Shifter Masters driver, earning that crown.

With the rain still coming down, Rok Junior hit the track. Holding the outside line through the opening corner, Lorenzo Morsillo (Exprit) overtook polesitter Austin Boyle (Exprit) for the early lead. It did not last long as Boyle was able to recover the top spot before the lap was complete with Ayden Ingratta (RedSpeed) and Nicholas Gilkes (BirelART) in tow.

It appeared that Morsillo was holding up Ingratta as Boyle began to pull away and one lap after Gilkes retired in corner four, Ingratta pulled off the pass on lap five to gain the position. The group was spread out from there with Boyle tackling the tricky conditions with ease to score the biggest win of his career, followed by Ingratta and Morsillo. Cole Newton (RedSpeed) and Joseph Launi (RS Kart) rounded out the top-five, with Launi overcoming a spin on lap one.

The rain stopped falling during the Junior Final but the track was still plenty wet when the Rok Seniors rolled onto the track. Led by Kai Dalziel (Kosmic) and Nolan Bower (Exprit), the small field of only six took the green flag.

Dalziel jumped out to an early lead and looked poised like he was going to check out like he had most of the weekend, but a small mistake entering corner four on lap two saw him slide wide off track, opening the door for Bower, Robert Soroka (Exprit), Andrew Maciel (TonyKart) and Eamon Lowe (Exprit) to slip by.

As the track began to dry and tire wear became a factor, Soroka had closed the gap to the leader Bower and with only two laps to go, he was right on his bumper. He looked inside of turn five and six but couldn’t find a way by as Bower defended well to score the big victory. Dalziel recovered to finish third a few seconds later, while Maciel and Lowe slipped back to fourth and fifth in the final results.

The grid was split for the VLR Masters category with two drivers braving the conditions and going on slick tires, unsurprisingly they were veteran racers Frank Launi (GP Kart) and Sal Ditta (Intrepid).

From the pole-position, Launi had to hold on tight on the opening lap and surrendered the lead to Alexander Mankovski (Intrepid), who had a great launch at the start.

It quickly became apparent that slick tires were the right choice as Launi returned to the lead on lap two and began to lap quicker, much quicker, than his rivals. Ditta was forced to retire on lap three, ending his chances at victory.

Out front and long gone, Launi scored the win by 25-seconds, posting the fastest lap more than two seconds quicker than his competitors. Mankovski and Igor Manukov (Exprit) were the only two to remain on the lead lap, earning a trip to the podium for their efforts, while John Cariati (Intrepid) and Paul Everett (TonyKart) completed the top-five.

Following a pair of Briggs classes, the track was fully dry when Mini Rok took to the track for their Final. It took a few attempts to get the green flag, but when it waved, Jordan Di Leo (Intrepid) vaulted past polesitter Ryan Maxwell (Energy Kart) for the early lead.

Opening up an early lead, Di Leo was in control until a small mistake on lap five exiting corner seven resulted in a half-spin. Surrendering the lead to Maxwell, Di Leo slipped all the way to ninth before he was back up to speed.

Out front, Maxwell and his teammate Jensen Burnett (Energy Kart) had built up a big lead by working together. Behind, Stefano Picerno (Energy Kart) and Santiago Ramirez (Intrepid) were duking it out for the final podium position.

With the laps winding down, Burnett had a few peeks by never really pushed too hard and earned an Energy Kart 1-2 with Maxwell scoring the victory. Ramirez broke free of Picerno and took third place while Di Leo recovered to finish fifth with the fastest lap of the race.

It’s a quick turnout for Kart Stars Canada as round two takes place next weekend at Innisfil Indy. Online registration opens on Monday, July 20 via the https:///kartsportcanada.ca website.