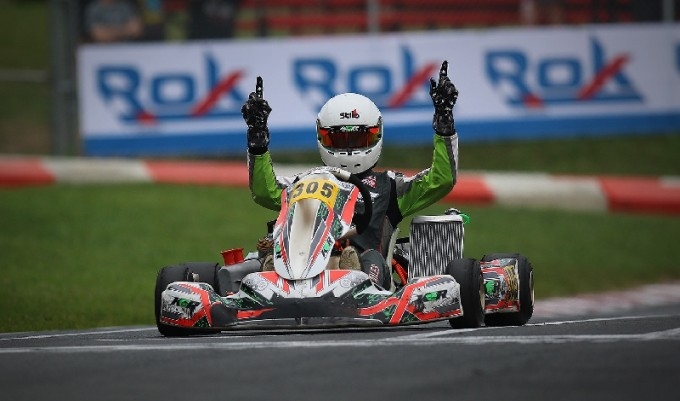 As the only kart on the grid with slick tires, only moments before the ROK Senior Final was to hit the track for the Kart Stars Canada Nationals Final at Goodwood Kartways, Matthew Miles (Exprit Kart) wasn’t 100% sure his team made the right tire decision. Even five laps in, it was still a struggle to find grip and keep his momentum, running around at the tail of the field. But, by the halfway mark of the race, the track turned and suddenly Miles was two to three seconds a lap quicker than his competitors; but more than fifteen seconds back of the leader.

Lap after lap, the gap closed and Miles was picking off karts as fast as he was catching them. As time was running out, he had worked his way by Kai Dalziel (Kosmic) for third and the leaders seemed out of sight. But he blistered off three quick laps in a row and had found the rear bumper of leaders Robert Soroka (RedSpeed) and Nicholas Hornbostel (Kosmic)
He got Hornbostel out of corner nine and as the white flag flew, Miles navigated corner one much better than Soroka and pulled off the pass. Pulling away throughout the remainder of the final lap, the crowd roared as Miles celebrated the unexpected victory.

In the race for second, Hornbostel moved Soroka out of the way in corner six to gain the position, but officials penalized him for it, moving Soroka to the second step of the podium and Hornbostel third. Nolan Bower (Exprit Kart) and Frank Launi (GP Kart) completed the top-five, a distant fourteen seconds back of the leaders.

For Soroka, Bower and Andrew Maciel (TonyKart), the rain couldn’t have come at a worse time and the three were the top of the field throughout the three days of dry track conditions.

For his victory, Miles raced his way into the ROK Cup SuperFinal being held this fall in Italy.

Runner-up wasn’t all bad for Soroka though, as New Speed Motorsports awarded him a test day in their NASCAR Pinty’s Series race car. He also won an entry fee into the 2021 Florida Winter Tour.

Jordan Di Leo (Intrepid Kart) capped off a very impressive weekend of racing at the KartStars Canada Nationals by scoring his second victory in as many days when he controlled the Mini ROK Final at Goodwood Kartways.

A slight sprinkle began to fall just as the Mini ROK division took to the track for their Final. It was a major difference to the sunshine and heat the competitors were used to through Friday and Saturday of the competition.

With the drizzle coming down a little harder, the drivers had to be very cautious for a few laps, with Picerno and Maxwell spinning in corner one and collecting Ilie Tristan Crisan (CRG) in the process, ending all of their chances at the podium. Only Picerno was able to continue.

Even in the slick conditions, Ramirez and Di Leo traded the lead before the rain stopped falling at the halfway point of the race.

The leaders pulled away from Burnett, with Ramirez sticking close with Di Leo until the final three laps. The race leader then ran his quickest laps of the race to set the fast time and pull away to victory.

Burnett held off a late race charge from Christian Papp (Intrepid) to ensure he stayed on the podium and in the championship points battle. Rocco Simone (Intrepid) came home fifth.

Di Leo earned a ticket to the ROK Cup SuperFinal in Italy for his victory and will join Team Canada for the first time in his career, while Ramirez earned an entry to the 2021 ROK Cup USA Florida Winter Tour.

Three in a row. Austin Boyle (Exprit Kart) scored his third KartStars Canada victory in a row, this time at the KartStars Nationals at Goodwood Kartways.

After hot and sunny conditions on Saturday and Sunday, dark clouds loomed on Sunday for the final day of the competition. Only moments after the first Final was completed, the skies opened up and with ROK Junior on the grid, the race was declared wet. Racers, mechanics and friends scrambled to switch everything over in the 15 minutes of allotted time before karts were sent back out on the track.

From the drop of the green flag, Boyle was lights out. Throughout the 18-lap Final, he was the only driver to clock in 46-second bracket and lap after lap, his lead continued to build. At the finish line, the difference to second place was fourteen seconds as Boyle was crowned the KartStars National Champion.

In a heated race for second, Joseph Launi (RS Kart) pulled off a great pass on the outside to overtake Lorenzo Morsillo (Exprit Kart) and gain the position and earn his best result a Junior. Also getting the better of Morsillo before the finish was Christian Valverde (TonyKart) as he overtook with only one corner remaining before the finish line.

For his victory, Boyle not only opened up a huge lead in the championship, but also secured a ticket to the ROK Cup SuperFinal in Italy this fall. Launi earned an entry to the 2021 Rok Cup USA Florida Winter Tour as well.

On a drying track, all of the Masters switched back to slick tires for the Final after watching a single driver in ROK Senior manage to win in the race prior.

Like he did all weekend, Joe Crupi (TonyKart) jumped out to the early lead and built up a very big lead, until disaster struck. The officials noticed his rear bumper detached and on lap four, Crupi received the meatball flag, ending his chance after dominating all weekend.

Cariati inherited the lead when Crupi pulled off and fought off his good friend Mankovski all the way to the checkered flag. Mankovski had his hands full with Simone that kept him from really pushing Cariati at the end.

Celebrating the win with the biggest smile in the paddock, John Cariati will return to South Garda Karting in Italy for the ROK Cup SuperFinal this fall, after competing in the event in 2018.

Mankovski wound up second at the finish line, followed by Simone. However, Simone was delivered an unsportsmanlike penalty for a post-race incident, that knocked him off the podium and Manukhov up to third overall.

Surviving an exciting opening lap that included a wild ride off the exit of the final corner and surrendering the lead to Justin Luik (BirelART), who opted for rain tires on a slick track, Greco settled in on lap three and never looked back.

The margin of victory was 5.3 seconds, helping Greco secure a ticket to the ROK Cup SuperFinal in Italy this October. It will be his second trip to the event at the famed South Garda Karting circuit.

Joshua Conquer (TonyKart) had a rather uneventful cruise to score the second step of the podium. Once his tires came up to temp, he did his best to stay with Greco early, but just couldn’t match the pace of the leader. Lucio Masini (Formula K) came home third as he too settled into a rhythm early in the race and held the position from lap three onwards.

Dante Lerra (GP Kart) and Antonio Ferrari (RS Kart) completed the top-five, while Justin Luik was a DNF as his rain tires faded fast as the track dried.