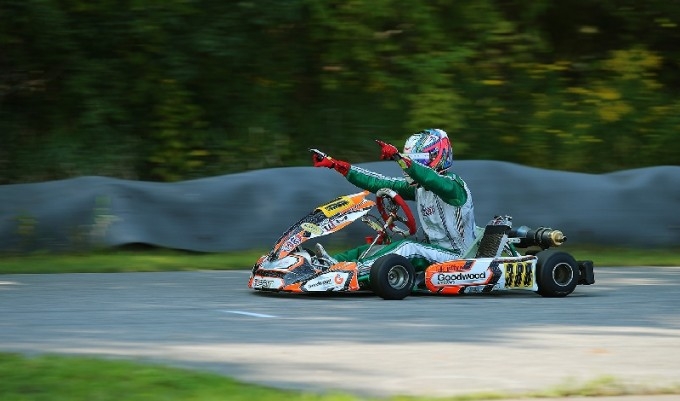 Scoring his third KartStars Canada victory of the season, Nolan Bower (TonyKart) drove home the ROK Senior Championship and booked a ticket to the ROK Cup SuperFinal in Italy.

Tackling the 3-S Go-Karts circuit in Sutton for the fourth and final round, Bower was able to lead from flag-to-flag in the Final to score the victory over his championship rival, Robert Soroka (RedSpeed).

While Soroka was able to put the pressure during the heat races and PreFinal, his pace slipped in the Final with Bower pulling away to an eventual 2.418-second victory. As the vice-champion in the category, Soroka was awarded en entry to ROK the RIO in Las Vegas this fall.

In the ROK VLR Masters division, Anthony Simone (Intrepid) scored the victory in his first visit to the 3-S Go-Karts circuit in more than two decades.

A regular circuit back when Simone raced as a teenager, 3-S brought back some wonderful memories of where it all started for him back in the ’90s.

Capping off a nearly perfect season of KartStars Canada competition, Austin Boyle (Exprit) scored his fourth victory in as many races to sweep the season in ROK Junior at 3-S Go-Karts.

It wasn’t an easy weekend for Boyle. With the championship secured before the weekend even began, those competing for vice-championship honours and the ticket to the ROK Cup SuperFinal that came with it, his fellow competitors were really pushing for maximum points.

There was some confusion before the PreFinal even began when pole-sitter Lorenzo Morsillo (Exprit) spun out on the pace lap and had to start the race at the rear. Ayden Ingratta (RedSpeed) inherited the top spot and sped off to win the race over Boyle, but was accessed a 3-position penalty for disobeying an official for not slowing down on the pace lap, dropping him to fourth on the grid for the Final.

Before the group even got to corner one at the start of the Final, karts were flying in every direction. Ingratta closed down on Morsillo thinking he was clear, but wasn’t and the contact spun them both and collected Joseph Launi (RS Kart), Matte Ferrari (TonyKart) and Michael Riccio (GP Kart).

Boyle, Sara Vico (Exprit), Nathan Tiemersma (TonyKart) and Cole Newton (RedSpeed) avoided the chaos and led the field around lap one, while Launi was unable to continue.

On lap three Tiemersma pulled off a pass in corner one to grab second from Vico and Newton tried to follow but Vico shut the door. The contact sent her spinning off into the grass and an unfortunate early retirement after a great run in the PreFinal.

The race would settle down from there with the exception of Ingratta. He was on a tear and chased down the leaders. Wasting no time getting by Newton and and Tiemersma, the gap to Boyle out front was more than two seconds with only a few laps to go.

Blistering off the fastest laps of the race, he caught Boyle on the final circuit but just wasn’t close enough to make a pass before the final lap completed.

However, officials handed Ingratta a 3-position penalty for ‘failure to leave racing room’ on the start, delegating him to fifth, moving Tiemersma to second and Newton onto the podium in third. Adding more salt in the wound, it would also change the final points standings as Morsillo scored enough points to overtake Ingratta in the final rankings and with it, take home the ticket to the ROK Cup SuperFinal in Italy.

A dominant performance for Ryan Maxwell (Energy Kart) at the fourth and final round of the 2020 KartStars Canada Championship helped him win a ticket to the ROK Cup SuperFinal in Italy to represent Team Canada.

Leading every lap of the Mini ROK Final at 3-S Go-Karts on Sunday, Maxwell secured his second win of the year, and although it wasn’t enough to overtake championship leader Jordan Di Leo (Intrepid) in the final points tally, it was enough to win the ticket as the vice-champion and as he will partner up with Di Leo at the international gathering of Rokkers from around the world.

Maxwell pulled out to a 2.849-second margin of victory, while the real battle on track was for second.

Santiago Ramirez (Intrepid) won the race into corner one, but he overshot his entry into the corner and Maxwell crossed him over to take back the lead. This left Ramirez vulnerable for second and Jensen Burnett (Energy Kart) pounced on the position. A lap later, Stefano Picerno (Energy Kart) also found his way by Ramirez.

Ramirez settled down from there, worked his way back by Picerno to regain third and then pursued Burnett. Closing back in on the rear bumper of second place with a handful of laps remaining, Ramirez hounded Burnett but never pulled the trigger on a pass. Waiting until the final corner of the final lap, Ramirez dove to the inside, but bailed out at the last second and Burnett held the position to finish second.

Picerno finish fourth while Di Leo recovered from a spin in the PreFinal to finish fifth and secure the championship title.