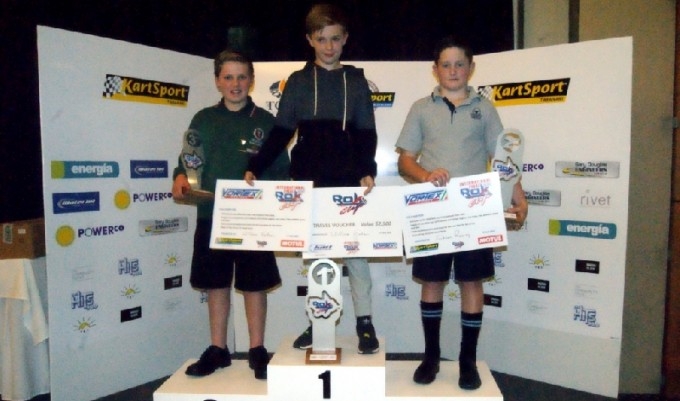 Morris guaranteed her spot when she won the class title at this year's Giltrap Group-backed KartSport New Zealand Sprint Championships meeting in Hamilton at Easter.

Picton driver Exton, and Rooney, from Palmerston North, earned theirs when they finished first and second respectively in the overall series' points standings in the class at the final round of the 2016 ROK Cup New Zealand series (held in conjunction with the Todd Energy KartSport NZ National Schools' Championships meeting at Waitara) in Taranaki over the weekend.

The ROK Cup International is one of the biggest manufacturer-backed events on the international karting calendar and this year it is expected to attract over 360 karters from more than 20 countries around the globe to the Lonato kart track in Italy from the 19th to the 22nd of October.

New Zealand has been represented at the past two ROK Cup International Finals; by Ryan Wood from Wellington in 2014 and Billy Frazer from Pukekohe in 2015.

Vortex is a leading manufacturer of kart engines in Italy, and ROK Cup New Zealand series' promoter Maurice Frost of New Zealand Vortex engine importer Supreme Engines says that the experience the young Kiwi foursome will get at the ROK Cup International event will only be good for them, and the sport here when they come home.

As part of their prize packs the four Kiwis get accommodation and lunches while they are there for the event, free event entry, the use of a new kart and engine, free race tyres and paddock space including tent. Other trip costs will also be subsidised by a fund set up by KartSport New Zealand and the official oil supplier for the Vortex Mini ROK engine classes, Motul.

The series' winner of the Cadet ROK class (for 6-11 yr olds) Ryan Bell from the Bay of Plenty, also won a substantial prize, a brand new Vortex engine worth $3000.