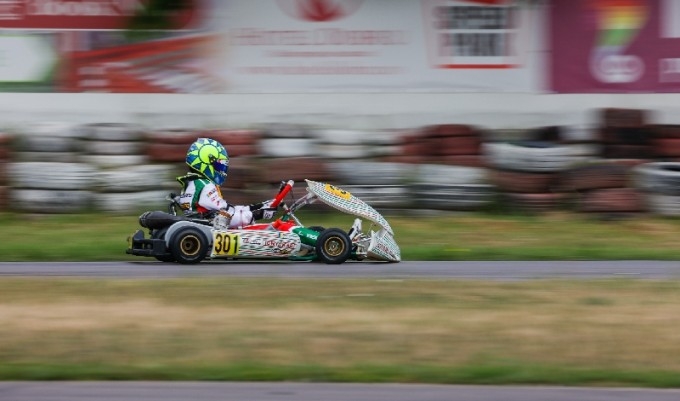 The "Speed ​​Park" circuit in Bacău, one of the circuits with old states in the local karting, hosted in the weekend that just ended the third stage of the 2022 calendar of the Romanian Karting Masters. The Moldavian stage gave rise to highly contested races in all five categories. In the two days of the competition we had everything from wheel to wheel duels, to impossible overtaking, outings and abandonments.

Notable drivers of this stage with number 3 in the current Romanian Karting Masters season included Iliya Haza (Borsch Racing) and Costin Tudor Ion (Real Racing), both the authors of a "treble” in the categories in which they competed. In terms of surprises, we mention Darren Betea, the leader of the Mini ROK general classification before Bacău, whose best ranking was a place 4.

What happened in Bacău, category by category?

Junior - one turn away from a "treble"

On the starting grid for the Junior Rok class, we had only three competitors this weekend. The winner of the stage was Luca Paul Viișoreanu, who won two of the three rounds of the competition, as had happened a month ago, in Prejmer. The Real Racing driver's mission was not easy at all, as he had a formidable opponent in Lev Krutogolov. In fact, the latter "stole" the Romanian's victory in the third round of the competition in the last corners. Viișoreanu's main rivals, David Cosma-Cristofor and David Dragan, were absent from Bacau, competing in Italy.

Promo - 2 out of 3 due to a technical problem

In the Promo KM class, the 10 drivers on the grid gave a real show on the circuit in Bacău. The highlight of the stage was the Ukrainian David Bakumenko (Borsch Racing), who won the first two rounds of the competition. Although he started from pole position in the last round, he missed the "treble" in the last round due to a technical problem, and the victory went to Teodor Vasâlcă (BRT). In the general classification of the round in Bacău, however, the two victories were enough for Bakumenko to climb the highest step of the podium, being followed by only 2 points by Vasâlcă and 7 "lengths" by a colleague of team, Nikita Potetiuiev.

Micro - victories one after another

With 15 competitors on the grid, the Micro ROK category was marked by the error-free evolution of another driver from Borsch Racing, Iliya Haza, who won all the competition rounds in Bacău. In two of these, he overtook his teammates Makar Palshyn and Krylyo Symeniuk, all three members of the same Borsch Racing team. Antonia Vidican (Vidi Top Sport) managed in the third round to finish in third place. Instead, Darren Betea (BRT), the leader of the general classification of the category before the stage in Bacău, had emotions. After a 4th place in Saturday's round, a 15th place and a 14th place in Sunday's races came. In these conditions, Betea lost the leadership of the pilots in this category in favor of Antonia Vidican, who now has an advance of 6 points.

Mini - the winners of the races shared the podium

In the absence of Gulstar Racing drivers, Bogdan Cosma-Cristofor and Cristi Velciu (who competed in Italy), in Bacău we witnessed extremely lively duels, proof that each race had a different winner. Sonia Crivoiruc (Prejmer Circuit) won the race on Saturday, followed by Yehor Keydun (Borsch Racing) and Patrick Săliștean (Autosally). In Sunday's session, the boys shared their victories, and in the end Săliștean was declared the winner of the Moldovan stage, which propelled him to 3rd place in the "general". The first two positions are still occupied by Cosma-Cristofor and David Nicolaie (Real Racing), who came close to 9 points ahead. Sonia Crivoiruc won the Mini ROK Lady trophy and is now on the fourth place in the general classification, 17 points behind Săliștean.

Finally, the KZ2 category was again dominated in a very clear way by Costin Tudor Ion, who seems to have no rival this year. The Real Racing driver repeated the feat from Prejmer, managing to win all three races again, each time with a gap of over 11-12 seconds. In the first two races we had an identical configuration of the podium, with Ion on the first position, followed by the drivers from the Superkart Racing Team, Gianluigi Franceschini and George Guli. The 3rd place occupant in the "general", Andrew Denis Boriceanu (Drinago Racing), managed a 3rd place in Bacău in the third round. Franceschini won the KZ +35 category ahead of George Guli and Philipp Koehler (JMS Performance).

Complete results and other useful information are available on the official website of the competition. Visit the facebook and Instagram pages of the Karting Masters series.