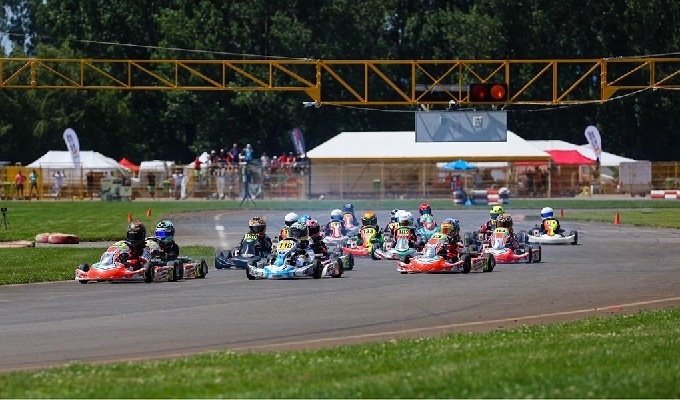 After Bucharest, Prejmer and Bacău, in the weekend that just ended it was the "Skat Kart" circuit in Târgu Secuiesc to host the RKM4 stage and to close the circle of the 4 competitions on 4 different circuits. This stage not only had the largest presence at the start, but also had a premiere in the mechanics' competition.

As we got used to, we had extremely contested races in all five categories (in fact 7 categories if we include those of the mechanics 😊). And this, especially on the second day of the competition, when they ran on rain and wind, extremely difficult competition conditions, these children coped brilliantly. Among the remarks of the Covasna stage were Luca Paul Viișoreanu (Real Racing) and Nikita Potetiuiev (Borsch Racing), who obtained the maximum score in the categories in which they competed. In terms of surprises, we nominated Darius Lucian Babaioana (Transkart Racing Club) who, although in his first appearance at RKM, ticked off a victory and two second place finishes.

What happened at Targu. Secuiesc, category by category?

JUNIOR ROK: Viișoreanu, the second "triple" of the season

Final results: Here Luca Paul Viișoreanu stood out too. The talented Real Racing driver won all three rounds of the competition, as had happened at Prejmer at the beginning of May. The driver from Real Racing had this time in Lev Krutogolov (Borsch Racing) an extremely tenacious and uncomfortable opponent, but Viișoreanu did not let the history of the final round in Bacău be repeated and won the second "triple" of the season. He consolidated his leading position in the "general", now having 215 points, 102 points more than the driver in second place, David Cosma-Cristofor (Gulstar Racing).

Final results: In the Promo KM class, the pilots gave a real show on the circuit of Tg. Secuiesc. The highlight of the round was Nikita Potetiuiev, who got the revenge after the 3rd place from Bacău and won on "Skat Kart" in all the competition rounds. We can't go any further without noticing the very good evolution of David Darie, who won two podiums and a 4th place, which propelled him to the second position in the final classification of the stage. The podium was completed by Teodor Văsâlcă, who did not repeat the good evolutions from Bacău and had to settle for Tg. Secuiesc with the third place, only five "lengths" behind Darie.

Final results: With 20 competitors on the grid, the Micro ROK category recorded the largest participation this season. The Covasna stage was marked by the almost flawless evolution of the Borsch Racing team driver. It is about Makar Palshyn, who won the first two rounds of the competition and was very close to winning the third. The one who did not agree was Victor Gorun, who adapted better to the difficult conditions of the competition and, although he started the fifth in the race, he managed to cross the finish line first. However, Palshyn finished the stage victorious, after the 3rd place obtained in Bacău. On the second place was Antonia Vidican, who in the finals managed to tick a 2nd place and a 3rd place. The podium was completed by Illya Haza, the one who three weeks ago won all the rounds.

Final results: After the absence from Bacău, when he competed in a race in Italy, Cristian Velciu returned in force in RKM and won the first round of the competition starting from pole position in front of Yehor Keydun. This victory was followed by a 3rd place in the second round for the Gulstar Racing driver. Keydun would take revenge in the third round and, for only two points, won the stage in front of Velciu. Before the second race, a few minutes before the start, the mechanics had a moment of balance regarding the choice of tires, being announced the race in the rain (wet race). Most chose slicks, and a few went to safety. Alin Topuzaru, Velciu's teammate, helped by the rain tires, drove perfectly on a torrential rain started a few minutes after the start and won with an advance of almost 20 seconds. The podium at Tg. Secuiesc was completed by Alexandru Valentin Hendrich, who finished two rounds on the second position. David Nicolaie (Prejmer Circuit) remains the "general", but his lead over Velciu has now dropped to just 3 points (162 from 159). In the "ladies" hierarchy continues to lead Sonia Crivoiruc (Prejmer Circuit) with 145 points, followed at a great distance by her colleagues Ruxandra Cozma (89.5) and Carla Maria Roșu (78.5).

Round 3: Darius Lucian Babaioana (Transkart Racing Club / A / A / Levanto)

Final results: The KZ2 category follow the hottest and most dramatic competitions we have witnessed so far this season. Started as the big favorite after the eight victories in nine rounds played in 2022, Costin Ion did not have an easy task this time. His main opponent was Darius Lucian Babaioana, who caused great problems to the leader of the general classification. He defeated the Real Racing driver twice on the circuit, but in the second round he “stole” the start and was penalized with 10 seconds, being relegated at the end of the race to the second position. Babaioana got his revenge in the Final 3, which he won after overtaking Ion in the very first corner. The stage was therefore won by Costin in front of Darius for a single point. Andrew Denis Boriceanu climbed the third step of the podium. At the "general" detached leader is Ion with 266 points, who is now followed by Boriceanu (184). George Guli (Superkart Racing Team) won the "KZ +35" category, ahead of his teammate Gianluigi Franceschini and Jakub Hejnar (Formula K Ro), although in training on Friday Guli had an accident due to which his chassis was quite wrinkled. Not having a spare chassis, the team of mechanics still managed to fix the problems in time.

At RKM4 we inaugurated a series of competitions in which mechanics can also participate directly. Held at the end of Saturday, the contest had 2 categories - small (micro + mini) and big (junior + kz2) - in which teams consisting of mechanic and pilot entered. The mechanics had to mount a rear tire on the rim and the rim to catch it with nuts on the hub, and the drivers ran to bring them the necessary ones - the tire, the rim, the nuts and the key had to be brought one by one from a distance of 10 m from the kart. . We had everything: fans, galleries, pre-finals, finals and two winners: Angelo Napolitano (together with the pilot Radu Basescu Pricop) - in the small class and Sebastiano Merci (together with the pilot Gialuigi Franceshini) - in the big class, who won the two vouchers made available by the racing.expert store.

We are glad that everyone felt great and it will definitely be just as beautiful at the next contest!