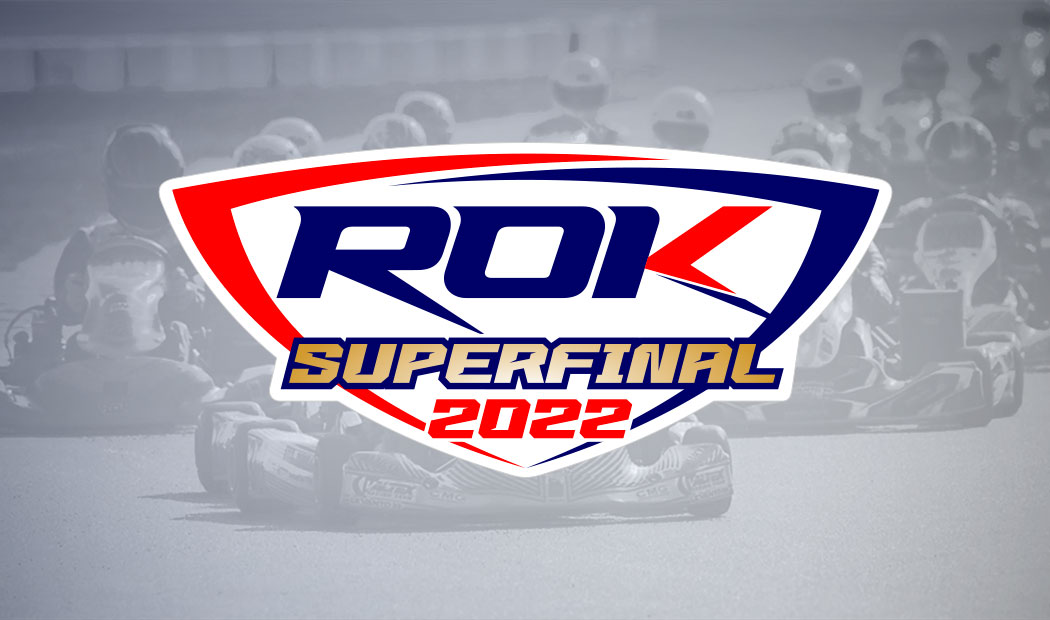 The 20th edition of the ROK Cup Superfinal goes down in the annals by right. A resounding success once again this year, with no less than 49 different countries attending the 7 categories at the South Garda Karting in Lonato (Italy)

So many emotions and so many unexpected twists during the four days of the international event branded by ROK Cup and Vortex Engines, which opened on Wednesday 19th October with the free practice sessions and ended on Saturday 22nd with the finals.

Almost 400 Rokkers gave life to a unique and global spectacle on a historic circuit that represents the stage par excellence of the world karting.

And for an event of world fame, the prizes could not have been less: the top five in each category were awarded with engines, technical equipment and, of course, the well-deserved trophies, depending on their placing.

Let's find out then, in detail and category by category, how the races went from qualifyings to the finals.

There was a large number of entries in the MINI ROK: a total of 89 which led to qualifyings being divided into four groups. Kacper Rajpold (Poland) is the fastest overall with a time of 54.342, gained in Group 3. He is followed, in the combined ranking, by Milosz Smuk (Poland), second with a gap of 37 thousandths, and Bruno Gryc (Poland), third at 43 thousandths from the pole position.

In the first three qualifying heats on Thursday, Vivek Kanthan (USA), Sebastian Eskandari-Marandi (Australia) and Kai Johnson (USA) emerged as winners. Kanthan repeated on Friday with two wins, as did Johnson with a further success, while William Calleja (Australia) collected two first places. With the sum of penalty points, Kanthan stands in the overall rankings, followed by Calleja, Johnson and Eskandari-Marandi.

The decisive MINI ROK race offers a breath-taking spectacle. At the start, Kanthan holds the lead ahead of Johnson, Shen Zeyu (China), Calleja and Qarrar Firhand (Indonesia). However, within a few laps, the battle for the first place becomes an affair between the two teammates Kanthan and Calleja, in a continuous change of leadership. On the last lap, Kanthan places the winning overtaking on Calleja and defends himself brilliantly from the Australian as well as Bogdan Cosma-Cristofor (Romania), who incredibly climbs from 16th place on the grid. The three end in a sprint to the finish line, with Kanthan first by just 77 thousandths of a second. Calleja and Cosma-Cristofor are second and third, respectively.

In the consolation MINI ROK final, Sebastian Dias (South Africa) takes the lead at the end of the first lap, but it’s Tom Wickop (Poland) running ahead on the second lap not leaving it until the chequered flag; however, the Polish driver receives a three-second penalty during the race and drops back to fifth. Wiktor Stalmach (Poland) beats Norbert Plaszewski (Norway) by just 47 thousandths of a second thus winning the race, with Jack Moore (South Africa) completing the podium.

Record figures in the Junior ROK, with 108 drivers battling on the track. Among the four groups, David Cosma-Cristofor (Romania) emerges in pole position with the best time of 49.305, ahead of Martin Molnar (Hungary), second by just 34 thousandths, and Aleksandar Bogunović (Slovenia), third with +0.050.

The 15 scheduled qualifying heats are divided between Thursday, Friday and Saturday. Patrik Fraboni (Italy) gains four victories and climbs to the top of the overall standings, ahead of Cosma-Cristofor (three times first) and Filippo Parmeggiani (United Arab Emirates). Nicolas Marchesi (Italy) also takes a victory, fourth, while Molnar is sixth despite three wins. Bogunovic also wins a heat, but drops back to 16th place. Also worth mentioning the first place for Vegard Klemetsen (Norway) in the heats, qualified for the Saturday afternoon's final, and the two victories of Ethan Lennon (South Africa), the latter, however, excluded due to two stops in the qualifying heats.

The challenge in the Junior ROK final is fierce. From pole position, Fraboni immediately leads the group, ahead of Parmeggiani, Filippo Tornaghi (Italy), Molnar, Marchesi and Jensen Burnet (Canada). Parmeggiani studies Fraboni closely over the first nine laps, then takes the lead on lap 10. However, Fraboni re-joins to his rival after two laps, but their duel allows Cosma-Cristofor to catch up. It is just the Romanian driver who becomes the main protagonist of the race on the penultimate lap: he first overtakes Parmeggiani and then completes the job by jumping ahead of Fraboni as well. However, the tussle between Cosma-Cristofor and Fraboni favours Parmeggiani who, at the start of the last decisive lap, takes the first place. The UAE driver wins the final, with Fraboni second and Cosma-Cristofor third.

The other final of the Junior ROK category sees the lead of Lennon, first under the chequered flag with more than two seconds over the second-placed Caleb Campbell (Canada), who also sets the fastest lap in the race. The challenge for the third place, on the other hand, rewards Sebastian Manson (New Zealand) after a remarkable recovery of 12 positions from the starting grid.

82 drivers and three qualifying groups for the Senior ROK class. David Locatelli (Italy) tops the standings with a time of 48.262 seconds recorded in the first group. Lorenzo Bedetti (Italy) finishes second, while the third place goes to Jakub Rajski (Poland).

Locatelli is practically perfect in the qualifying heats, with a total of four wins out of four heats and a first place in the overall standings. Constancy rewards Eliska Babickova (Czech Republic) with a second position, author of a win, while Michael Müller (Switzerland) is third, also with a first place on his path. Despite his three victories, Rajski is fourth, with Luca Bettoni (Italy) completing the Top 10 list. A stop penalises Bedetti, who slips 21st despite his win in the B-E heat.

Brilliant performance by Locatelli in the Senior ROK final. No problems at the start for the Italian, immediately leading the race after the first corner, while behind him Müller, Bettoni, Bartosz Grzywacz (Poland), Rajski and Babickova are fighting for the second place. With Locatelli running away, Rajski reacts and moves up to second after just two laps. The Polish driver nibbles away at Locatelli's collected advantage lap after lap, but is unable to worry the race leader. Locatelli wins by a margin of 0.590 seconds over Rajski, second, while Bettoni takes the lowest step of the podium.

The Senior ROK trophy hides many surprises, especially in the post-race. Maalik Bintang Alisyahbana (Indonesia) opens the dances and remains in the lead in the early stages, but from the 6th lap Cristian Pastrian (Chile) takes the lead. The Chilean wins the race, but the race management excludes him for his behaviour not in keeping with the sporting rules. Tobias Nyberg (Norway) is second at the finish line, but he too receives a 5-second penalty for having his front fairing in the wrong position. As a result, the victory goes into the hands of Adrian Labuda (Poland), with Nyberg in the runner-up position and Lucas Pace (Malta) third thanks to a 24-position comeback.

Women's pole position in the Expert ROK with Sona Ptackova (Czech Republic) first thanks to a lap in 49.383 seconds. Second position for Renato Jader-David (USA), ahead of his fellow citizen Derek Wang (USA) in third place.

Hat-trick by Jader-David in the three qualifying heats on Thursday and Friday, again ahead of Marcel Nowak (Germany). The American also takes the pole position for the final, while the German driver is second in the category’s standing, ahead of Derek Wang (USA), third.

Jader-David closes a perfect weekend with a triumph in the final on Saturday afternoon. The American makes no mistakes at the starting grid and immediately takes the reins of the race. Wang does not let his compatriot go away, but, at the same time, cannot find any opportunity to attack him. Jader-David manages the race and wins, taking revenge after his unlucky stop in last year's final. Wang finishes second, Nowak ranks third.

Tino Donadei (Italy) signs the pole position in the Expert ROK Plus, finishing second overall (thus also considering the Expert ROK drivers, with whom the category shares the track). Paolo Baselli (Italy) follows in second place, with Mundy Loyer (Peru) behind him in third position.

Impeccable score for Donadei in the eliminatory heats: three wins out of three, even allowing him to be second in the overall classification. Baselli confirms his second position at the end of Friday, with Gianluca Todeschini (Italy) third.

Donadei is soon the leader in the early stages of Saturday's final: having started from the front row of the overall grid, the Italian driver consistently occupies the Top 3 and, at the same time, the first place in the 'Plus' category. At the end of 20 laps, Donadei hits a fourth place overall and the victory in his class, while Baselli and Todeschini take the remaining two steps of the podium.

It is William Go (Philippines) who sets the fastest time in Super ROK, thanks to a time of 47.783 seconds. Lyon Mathur (Switzerland) ends the qualifying heats in the second place at +0.038, while the third place goes to Dmytro Muravshchyk (Ukraine) with a gap of 58 thousandths from the poleman.

Riccardo Ianniello (Italy) shows his muscles in the three qualifying heats, winning the first two heats and finishing the third one in sixth position. With these results, the Italian lead the general ranking, with Elliott Shaw (Switzerland) second, thanks to a third and two second places. Go drops back to third position, while Alex Machado (Andorra) wins the third qualifying heat and climbs from 16th to 7th place.

Chaotic start for the Super ROK final. Ianniello is good at keeping the leadership, unlike Shaw who is sent off the track and forced to restart the race from the last positions. With his second place, Go tries several times to overtake Ianniello, but the Italian always responds effectively to his Philippine rival. However, Go does not give up and finally succeeds on lap 17. The race ends with Go winning ahead of Ianniello and Machado, but after scrutineering Ianniello is excluded from the final ranking. Machado is promoted to second place and Daniele Federici (Italy) takes the lowest step of the podium.

Nicola Rossini (Italy) is the only one able to go under the wall of the 47 seconds (46.964) and conquers the top of the classification in the Shifter ROK qualifying session. Karol Czepiel (Poland) and Costin Ion (Romania) are second and third, respectively.

Even in the qualifying heats, Rossini proves to have a different pace than his rivals’ and records three wins out of three, although in the second heat he then receives a five-second penalty for an early start. This small blemish on the Italian driver's scoreboard allows Cody Maynes-Rutty (Australia) to take the top of the standings on Friday night, with Rossini second and Alessandro Cavina (Italy) third.

Rossini makes no discount in the Saturday afternoon's final. The author of the best time in the qualifyings does not find a better way than the poleman Maynes-Rutty and runs four laps behind him before attempting an attack: in fact, at the first attempt, the Italian passes the Australian and begins a solo escape to the victory. Maynes-Rutty is unable to keep up with Rossini and finishes the race in second place. Starting fourth, Andrea Zemin (Italy) gains the third place as soon as the lights go out, but maintains his position until the chequered flag.